Introduction to the Costa del Sol 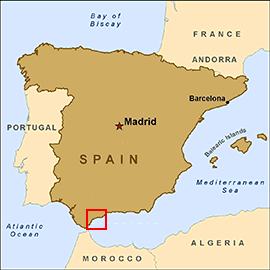 The area covered by this Web site is indicated by the red square on the map of Spain. This area is bounded by Gibraltar in the West and the city of Málaga in the East. Marbella is the main town in the middle of this area. West to East this is about 80 kilometers in distance. The Costa del Sol is in the Spanish autonomous region of Andalucía. Within Andalucía, this area is mostly the province of Málaga, with a bit of the province of Cádiz in the West.

There is quite a small strip of flat plain all along the coast. Not far inland there are a series of hills. The main road along the coast is the A7 (also known as N340). This is an old road that has been upgraded often. The speed limit on the A7 varies between 80 km/hour and 120 km/hour. Inland from the A7 there is a much newer highway - the AP7. The speed limit on the AP7 highway is typically 120 km/hour. The AP7 is a toll road for the most part. On certain stretches, the A7 and AP7 merge to form a single highway. If you play golf on the Costa del Sol, you will travel a great deal along these two roads, and all golf clubs will have directions starting from exits off these roads.

Like the rest of Spain, the Costa del Sol had a dramatic property (real estate) boom which ended in a big bust with the financial crisis of 2007-2008. Many golf courses were constructed as the main feature to sell property (villas and apartments) adjoining the golf course. A lot of developments ended up frozen - the developers went bankrupt and the banks were left with lots of non-performing loans. The full resolution of this problem really depends upon EU-wide bailout of banks and governments.

There are lots of vacant properties on the Costa del Sol. Some have legal problems in addition to financial problems. For example, were constructed - often with the permission of corrupt local officials - on land that should never have been allowed any development at all. If you are seriously considering buying a property down here, proceed with a great deal of care. Even if the development is legal and the price good, you may find the community functions badly. For example, the maintenance of the communal areas (gardens, pool etc.) is failing.

The Costa del Sol has the highest concentration of golf courses in Spain, so is touted by some as the 'Costa del Golf'. Certainly there is enough variety in the golf courses down here to keep all golfers happy. Prices tend to be competitive by European standards, particularly since the property bust. The 'easy money' days for golf and property down here have gone for a long time to come. Of course not all clubs/courses have been equally affected. The ones with good value are still doing OK. The ones that were wildly over-optimistic and greedy have suffered a lot.